As owners of the first and only diamond mine in Quebec, Stornoway Diamonds is meeting demand responsibly and sustainably. We find out more about this flagship asset with CEO, Patrick Sevigny.

Demand for diamonds aggressively rebounded to record-high levels in 2021. Although total output volume remains below pre-pandemic levels, the production and value of diamonds compared to 2020 was up by 12 and 51 percent, respectively.

It followed significant year-over-year declines in natural diamond production, resulting from oversupply for much of the last decade, depleting legacy mines, and a very limited number of new supply sources most recently compounded by the operational disruption and mine closures caused by COVID-19.

“In general, the increase in demand has been driven by a number of factors, including economic growth and a rising middle class in the US and China, as well as increased marketing efforts by diamond companies,” observes the CEO of Stornoway Diamonds Canada (Stornoway), Patrick Sevigny, who has always had a keen interest in value generation.

“In addition, diamonds have become more affordable for many people due to advances in diamond production and distribution.”

While the increasing demand for diamonds is good news for the industry, it is important for companies such as Stornoway, a leading Canadian diamond producer, to meet this demand in a responsible and sustainable manner.

This includes taking steps to minimize the environmental and social impacts of diamond mining, as well as ensuring diamonds are ethically sourced.

Stornoway has implemented a number of measures to minimize its impact, including the use of natural gas to generate energy and the establishment of partnerships with local communities.

“We have set global industry standards in environmental and social sustainability, and are one of the only Canadian diamond companies with a comprehensive socio-economic benefits agreement with local Aboriginal stakeholders,” reveals Sevigny.

“Moreover, both Stornoway and the Renard diamond mine are engaged in research projects to continually look for new ways to improve production and exploration processes.”

Known for producing medium-quality diamonds, production at the Renard mine commenced in 2015.

A significant contributor to the provincial economy and considered to be a responsible and sustainable operation, it is located in the remote James Bay region in north-central Quebec, one of the world’s best mining jurisdictions, and is wholly owned by Stornoway.

“Due to its isolated location, Renard has required the construction of a large number of infrastructure projects, including roads, airports, an electric power plant (natural gas gensets), housing, nursery and water treatment plant facilities,” shares Sevigny, who was born and raised in the Abitibi mining region of northwestern Quebec.

Renard is the first and only diamond mine in Quebec, one of just four diamond-producing mines in Canada, and the only one in the country that is accessible all year round by road.

As the mine is a temporary user of land that will be returned to its traditional users at the end of its lifespan, the project design has prioritized a minimal environmental footprint and progressive rehabilitation.

Occupying just 3.1 square kilometers within a single watershed, Renard is surrounded by a network of ditches that collect all the run-off water, which is treated prior to being returned to the environment.

“Buildings have also been designed and materials selected to facilitate dismantling, recycling, and revegetation at the end of the mine’s life,” adds Sevigny.

The Renard mine has reserves that will take it to 2025, primarily sourced from the Renard 2 kimberlite which is expected to produce the majority of diamonds mined at the site.

A project to extend the mine is now underway, which consists of deepening the ramp below the surface in order to mine the resources located between elevations of 600 and 850 meters.

A decision will be made this year on the project, and if approved, it will extend the life of the mine to 2029.

“Thereafter, the mine has additional resources in the Renard 4 and Renard 9 kimberlites that could be brought into production if diamond market conditions continue to improve. If these two kimberlites are mined, the mine life could be extended to 2035-2040,” Sevigny outlines.

Completion of the Renard expansion project is Stornoway’s main priority for the coming year, and in an inflationary environment where diamond prices are expected to decline slightly and certain commodity prices are higher, it is important for the company to meet production targets in order to maintain projected profitability levels.

Hydroelectricity, meanwhile, is another potential avenue for Stornoway given the potential to substantially reduce the company’s dependence on natural gas and diesel.

The water system on which Quebec’s numerous hydroelectric power plants are built, allowing the province to be one of the most important producers of hydroelectricity in the world, is located 120 kilometers north of the Renard mine.

Stornoway’s vision is to connect to the provincial hydroelectric grid, an initiative that must be accomplished in partnership with the Indigenous population to benefit all parties.

“Once the Renard mine is connected to the hydro grid, the vehicle electrification phase can be undertaken. This phase consists of converting high-consumption diesel vehicles such as loaders and production trucks to battery powered vehicles, which would enable Renard to become one of the greenest diamond mines,” notes Sevigny.

The success of Stornoway depends on having a committed workforce that upholds its principles and embraces the company culture.

Stornoway offers a fulfilling career path to its employees, the majority of whom work at Renard, and provides fair compensation and benefits that are in line with the salary range for each corresponding role.

“We give our workers rewarding opportunities for growth, recognize their accomplishments, promote and constantly hone a model corporate culture,” Sevigny emphasizes.

Of the 545 full time members of staff currently employed by Stornoway, 15 percent are women and 20 percent are from Indigenous and local communities.

Stornoway collaborates with its host communities in an atmosphere of respect, openness and partnership. By keeping open lines of communication, getting to know the values and concerns of the community, and working to address those concerns, the company hopes to establish long-lasting, fruitful relationships with its Indigenous and local communities.

“We work to improve the well-being of our host communities’ local economies and social structures,” Sevigny elaborates.

“By creating communication procedures with the Crees (a North American Indigenous people), putting together a joint environmental monitoring committee, hiring people of the communities, and conducting business with their firms and joint ventures, we have gradually developed a trusting relationship with them.”

In 2021, 1,334 hours were devoted to the professional development of Cree employees in various functions at the surface, in the processing plant and in the underground mine, whilst more than 2,100 hours were dedicated to developing staff members from the Chibougamau and Chapais communities.

383 certificates and 347 attestations were awarded to Cree personnel as a result of this training, as well as 790 certificates to Chibougamau-Chapais employees.

A relocation policy has also been set up and promoted by Stornoway to provide employees who relocate to Chibougamau and Chapais with financial benefits.

“The objective is to attract new residents to the region and retain the Renard mine’s workforce. The policy addresses the need to build the population of Stornoway’s host communities in Chibougamau and Chapais, in addition to maintaining a stable workforce,” Sevigny tells us.

The mining industry is diverse, and there are many different career paths that individuals can pursue, including roles in mining exploration, operations, engineering and management.

Generally, a career in the diamond mining industry may involve working in remote locations, such as the Renard mine, often in challenging and harsh environments.

“It can be physically demanding work, and individuals in the industry may be required to work long hours, including weekends and holidays,” acknowledges Sevigny.

As such, Stornoway makes sure that it provides a vibrant, friendly, and inclusive environment at the Renard mine to alleviate the demands of mining work. A workplace where everyone feels respected, along with maintaining a safe work environment and high environmental performance, will always be a priority at Stornoway. 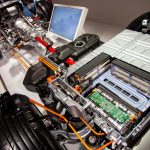 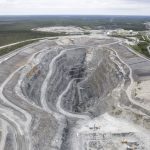